After spending the most comfortable 2 weeks of our journey so far in Kyoto, it was time for the next destination. Having a short intermezzo in Teipeh/Taiwan where we met an old friend of Adelia who showed us around the biggest night market in Asia and the Chiang Kai-Shek Memorial Hall, we arrived in Hanoi. Meeting 2 friends who started their world trip from Amsterdam (see their route and adventures on www.around-the-blog.com) and my boyfriend combined the arrival in Vietnam with the feeling of coming home actually and the first thing we did was having some beers in the old quarter of Hanoi, probably one of the busiest places I´ve ever seen. Sitting in the narrow streets on some tiny plastic chairs watching the colorful mix of street vendors, musicians and backpack-loaded tourists brings a special atmosphere, as if you become a part of this colorful mosaic just by sitting there and having a Pho. Thrilled by this unique mood, we took a walk from the Hoan-Kiem-lake to the Temple of literature passing the Ho-Chi-Minh Memorial and end at the (smaller than expected) Tran Quoc pagoda. Not so easy in the hot, humid climate-especially walking along streets makes you recognise what a regulated vehicle inspection like in Europe can procure. So we longed for some more nature and decided to visit Halong Bay, one of the 7 natural world wonders. This breathtaking landscape originates from a dragon, winding his way through the cliffs and rocks of this bay according to the vietnamese myths. Here we also made the first experience of masstourism, meaning that this bay was full of big boats and also our tour operater was just rushing through his program without any consideration of individual needs but anyway- we had a great time visiting a cave, paddeling out with a canoe and having a mini-party on the rooftop of our boat. 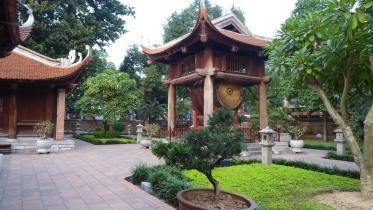 An enormous drum at the old university

Entering the Surprising cave made us feel very small 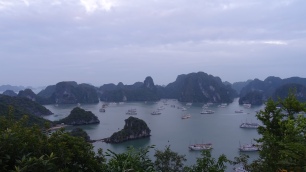 After two days there, we continued down south by night train (btw there is no possibility to go directly- you have to go back to Hanoi)  to the National Park Phong Nha-Ke Bang where the biggest cave in the world was just discovered some years ago. We found ourselves in the middle of highly-flooded fields, rivers and streets! As there was not much to visit these days due to former heavy rain falls, we rented a bicycle and entered the wideness of the rain forests and its beautiful views. We visited the botanical garden being welcomed by some monkeys (probably macaques) and saw a waterfall. Due to the weather we directly continued to Huế, former capital of Vietnam.Visiting the citadel and discovering the city by bicycle we had a very good time here. A big surprise was the concert of Vonwegenlisbeth in a university where we could enter for free. It was so sweet to see all the (still very young vietnamese) students sitting in their seats and we decided to take this concert “the german way” and started to dance in front of the stage! After a while more and more people joined us and the singer Matthias announced that this was the first time that people danced on their Asia-tour! This was an unforgettable moment on our journey for sure as it was a nice local experience to watch the vietnamese guys go crazy and dance and smile with us. 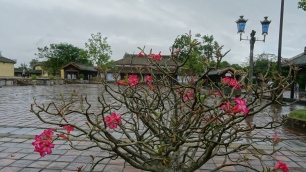 The citadel of Hue

Lake view of the citadel

There must be the way down here?! 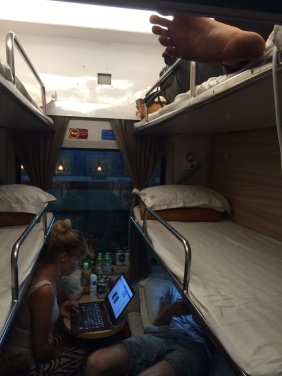 Our cosy sleeping wagon in the train

Our next destination was Hoi An, the city of thousand lights. Right by the river, this city is definetly worth visiting as it has this leaned-back atmosphere with many delicious restaurants and sites to see. We entered the japanese bridge, the most beautiful temple Quan Cong and the cultural museum (the view from the roof top is very recommendable!). Worth tasting is the mango cake sold in the streets, reminding us a little of the japanese mochis and has a peanutfilled-core but actually nothing of mango. Walking through the ancient town feels like a journey back in time because the buildings are so well-maintained and especially at night thousands of candles and lanterns cover the city in a cosy light. Talking about walking, we made the experience that from 3pm there are no scooters allowed in the old town- our scooters were removed from where we parked them and brought to a hall what nearly caused us a heart attack as we didn´t know about this! But we were lucky to not pay anything for this mistake, in general we didn´t make any bad experiences in our two weeks in Vietnam!

Streets of Hoi An 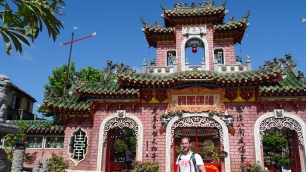 Our next stop Dalat we reached by flight from Na Trang due to time-saving measures and it was a nice surprise to go from the shores of Hoi An to the mountains and the coffee plantations of Vietnam (worlds 2nd biggest exporter after Brasil, sooo delicious with a trace of chocolate) in just one hour. Visiting the national park, we encountered a waterfall and enjoyed a nice trail through the wildness. We ended up being stuck in the rush hour with our scooters and got into a bad traffic- so now we are ready for the next step to drive in a bigger city also:op

Did you ever hear about “canyoning”? Me nether; so this means that you climb on top of a big hill or waterfall and abseil yourself only secured by a rope. It was such a thrill to climb up the waterfall and then abseil down in the pouring water, I never experienced this mixture of hights, physical power control and adventure before! Rasmus and Selma even jumped down an 11 m high mountain into the refreshing water. 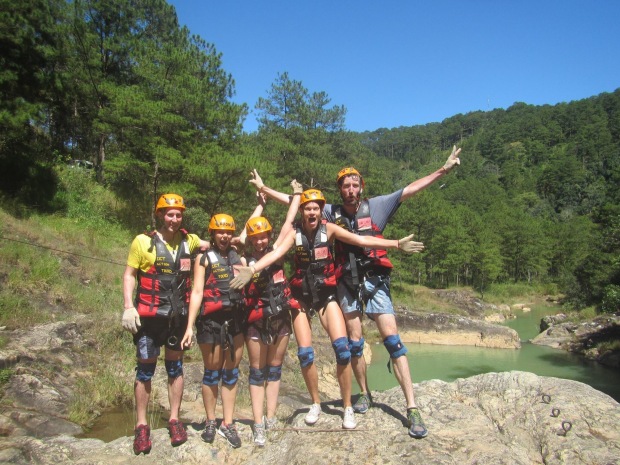 In the night we went to a very cool bar, the 100 roofes that is consisting of an enormous, self-made labyrinth on more than 6 floors with the sweetest roof garden!  This was the last encounter of our tour before going to our final destination Ho-Chi-Minh-City.

Here, we visited the war remnants museum and were deeply moved by all the horrible memories of Agent Orange, the war and the many faces of the vietnamese (and american) victims.

After this 14 days we visited 6 different cities and drove more than 2000 km. Maybe this is the reason why I don´t really got deeper in touch with vietnamese culture or habits- unfortunately. The most special experience was meeting the family of Sang, one of Rasmus friends who helped us a lot. Even dining together was very special because we got the best vietnamese food we tried in this 2 weeks.

Still, our journey through Vietnam was absolutely recommendable for the adventurers of you.

In our upcoming post we tell you everything about our experiences of crossing the border of Vietnam and enchanting Cambodia and how we persived the lovely Khmer culture.

Stay inspired by our journey,